Muench’ first contact with IHRSA came in 1982 first as a member, then commissioned to research the European Fitness market 1984-1985, and then as IHRSA’s European Liaison from 1985-1993.

Finally, he joined the world trade association for health clubs in 1994 as their first Director of International Development. A speaker at events in 18 countries, Hans rejoined IHRSA as Director of Europe in January 2008. Since then, he has been to 26 European countries collaborating with members and suppliers, supporting partners and attending approx. 100 events as the “eyes, ears and face” of IHRSA in Europe.

In addition to his consulting efforts, Hans joined the Advisory Council of AFS, a California-based organization focused on boutique clubs. In his tenure, he is adding an important global perspective to AFS’ activities.

From 2016 – 2020, Hans taught at the German University of Fitness, Health and Prevention. In their MBA program, he lectured on strategic planning, management and marketing and shared his vast knowledge of the fitness industry. 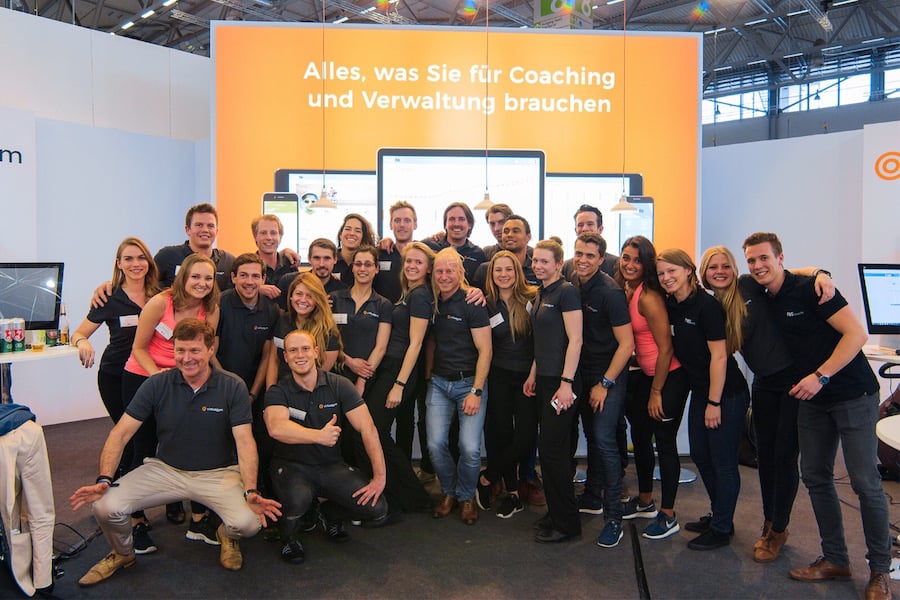 Hans with the Virtuagym Team at FIBO

Suppliers & operators look to Hans for his network and his experience to help them make the best possible decisions for expansions. As a veteran in the fitness industry, Hans utilizes his vast knowledge to consults clients who have international growth plans.

Hans has attended over 100 industry events and has been a speaker in 18 countries. His involvement stretches from presentations on his experience in the past 30 years, to industry trends to participation in panel discussions. He also moderates events and represents suppliers in exhibitions.

“Thank you for your great presentation. It was very insightful, gave us lots of ideas and made us think. We are now planning the year 2016 and the information and the ideas you provided us will be very helpful for our planning process.”

“Thank you, Hans. You were instrumental in the success of the event for us, and I am forever grateful for that!”

“Hans Muench has done a great job for IHRSA. He [..] has been tireless in his efforts to serve members and grow membership. With his involvement with IHRSA dating back to the association’s beginning, Hans was uniquely qualified to spearhead our operations in Europe.”

“I have known Hans for over 20 years and during that time he has demonstrated the highest level of integrity, honesty and professional competence. He was the inspiration and driving force behind IHRSA’s success in Europe. professional. I am honored to call him a colleague and friend.”

“Hans; my friend, mentor and industry colleague. With him in my life, opportunities opened, I developed personally and professionally.
We have jointly shaped the fitness industry of the Middle East, bringing knowledge, product and talent to the region.
Hans brings an enormous amount of knowledge and data to projects he takes on, while working with him is always fun and enjoyable.
In summary – he is shaping the global, regional and local fitness industry through his values and commitment.”

“During our collaboration, there’s never been a meeting in which Hans failed to surprise me with valuable insights and advice. His professionalism, enthusiasm and market knowledge make him a treasured partner.”

“It was really productive, the amount of contacts that we were able to make in the short period of time together. Thank you for your support.”

“Hans is a very polite and pleasant person. Aside from his concentration in conversations and his in-depth experience, he comes across as very knowledgeable and above all – honest.”

It was a pleasure to meet Hans and to hear his great performance!

I loved Hans’ presentation at MBM and his reflections on the boutiques entering in the training industry!

I got to know Hans as a lecturer during an MBA module. Already there Hans convinced with his experience and high practical relevance of his lectures as well as with his winning personality. Through his numerous international contacts, he opened several doors for me to advance my startup in the fitness and health industry. I thank Hans for his valuable work and look forward to working with him in the future.

As it comes to ethics, integrity and hard work, they don’t come much better than Hans Muench. Business skills, cultivating relationships, providing value, and working to make an impact are just a handful of his many gifts. I’ve always been impressed by who this man is and what he stands for. I recommend engagement with Hans for all networking opportunities and any business venture!

Hans, is a pioneer in the fitness industry. It is his passion! He has never deviated, and has stayed in the space his entire career. His reach and understanding is global. He is one of the first people I reach out to when contemplating an issue/challenge in the space. On a personal level, there are a lot of people in you meet in life, that say they will help you, but few actually do. I reached out to Han’s during a challenging period, and he did not hesitate to help. He acted quickly, actually right then and there on the call. Very few people in life like that.

Hans, thank you very much for your impressive effort!