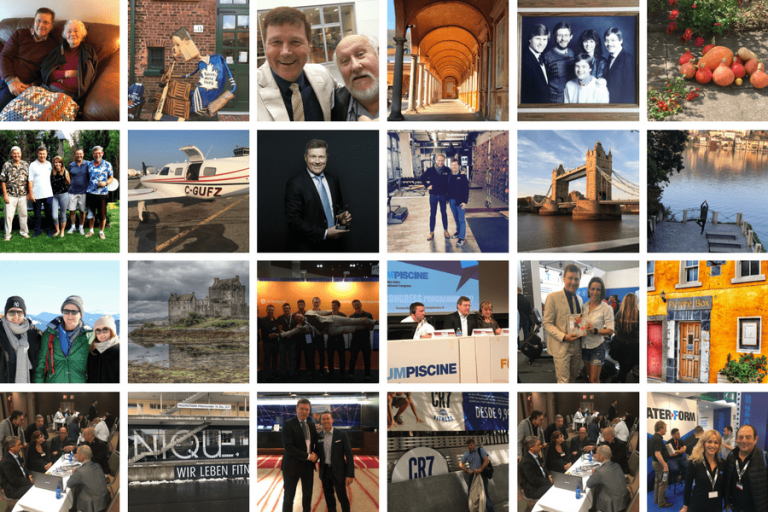 As usual, my year 2017 meant lots of travel, meetings with clients, industry friends, and family. Here are some of my highlights of another busy and enjoyable year.

Some of my personal highlights this year:

1) Starting the year with my family in Toronto My mother Paula in Toronto, the city of my birth. Paula turned 91 this year and still has a sharp mind. Canada vs. Switzerland U21 Hockey Game at the Air Canada Centre in Toronto. Canada got off to a 3.0 lead in the first period, only to have Switzerland tie the score, before Canada scored in overtime.

2) Ski Vacation in Austria in February, Vienna and Bologna On the Forum Bologna Panel. 2018 I will be giving a keynote presentation on boutique fitness developments globally. At John Harris Fitness in Vienna, a new Virtuagym customer.

3) IHRSA LA and Toronto with son Julian in March In LA with the Virtuagym team. Gym Factory in Madrid: in 2018 as Event Ambassador I will be presenting at their event May 10th and supporting the trade show May 11-12 Tower Bridge in London: Beside the Elevate show I also attended the Balance event

6) Lots of tennis at TC Eulach in Winterthur in summer Tennis at TC Eulach in the Summer, a wonderful multi-cultural community I feel very much at home here

7) Vacation in Scotland July and Toronto in August The Isle of Skye in Scotland was one of the trip highlights, we saw sheep being sheared, visited a local brewery and much more One of several castles we visited in Scotland, this one just over the bridge from the Isle of Skye Behind the Scenes with Gordon Lightfoot and my brother Guff, thanks to Clive Caldwell of Cambridge Club in Toronto for making this possible. When Gordon is not on tour (70x/year at the age of 80) he works out six times per week. Gordon Lightfoot on Stage: the first time I heard him perform live Winning the Lifetime Achievement Award, sponsored by Harlands (thanks to Rob Karn, second from left) Christmas with my family: traditional Raclette

As always, I had an eventful year with my clients in 2017 and look forward to continue our collaboration in 2018: The Virtuagym team at FIBO in Cologne, Germany in April AFS – Association of Fitness Studios (US) I joined the Advisory Council of the Association of Fitness Studios in March, 2017 In December I was appointed Ambassador of Gym Factory: event May 10-12, 2018 in Madrid and magazines in Spain and Portugal Roberto Maestrami and Davide Venturi from Il Nuovo Club with Paul Braam, Co-Founder of Virtuagym. On February 22, 2018 I will again be attending and presenting at their annual event. I write a regular column in the Fitness Tribune Magazine, which has a new owner, Roger Gestach, as of fall 2017. Pictured here is the REX Europe group at the Cyberobics showroom in Berlin The German industry research report DSSV Eckdaten is preduced in cooperation with DHFPG. I will again be lecturing in the MBA program of the German University for Fitness Health and Prevention in 2018

I wish all my readers & followers a prosperous and happy year 2018!