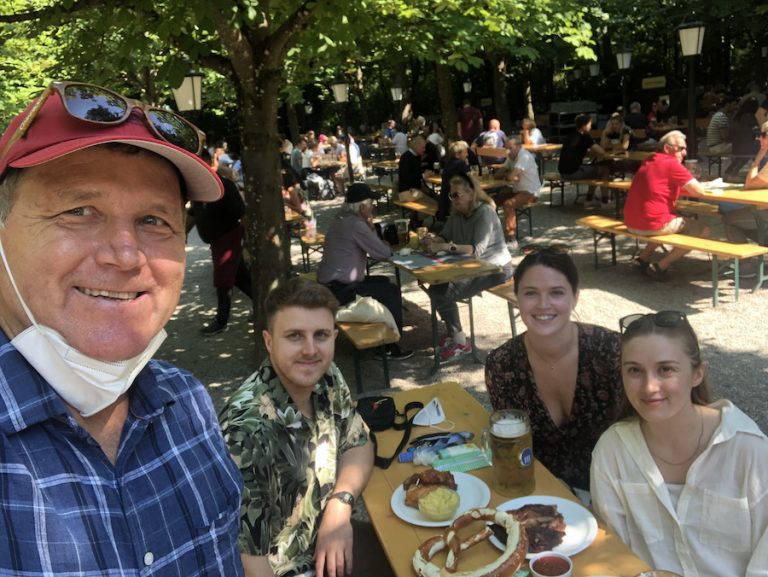 My trips in July

It was nice to play various games (throwing a football around, bocci, tennis, backgammon), visited the English Garden and the Aumeister Biergarten, and finally had a celebratory birthday dinner in Constance in the way home with my partner Annette.
How does it feel to be 63? Great. 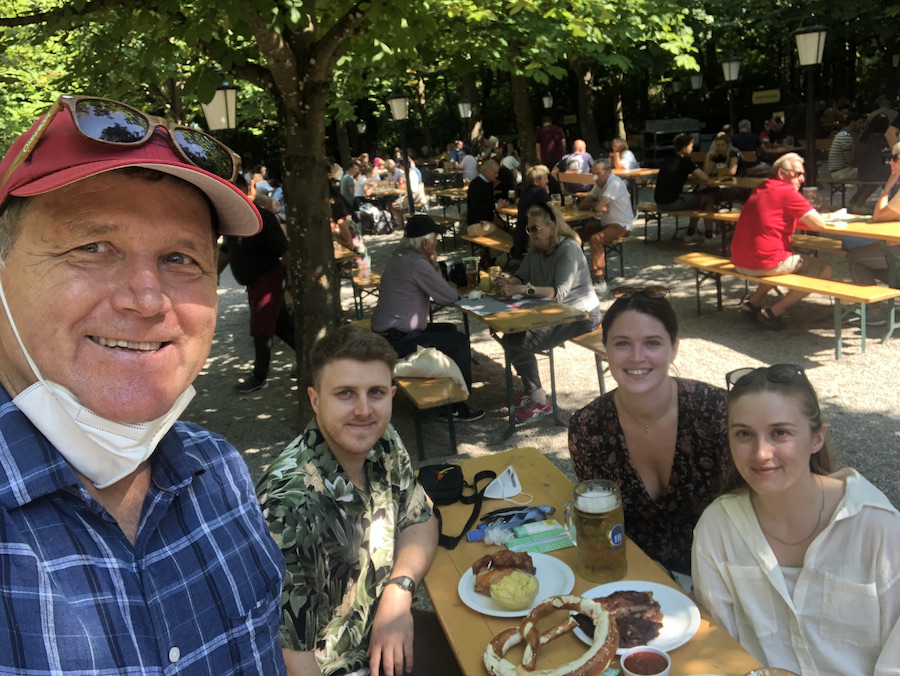 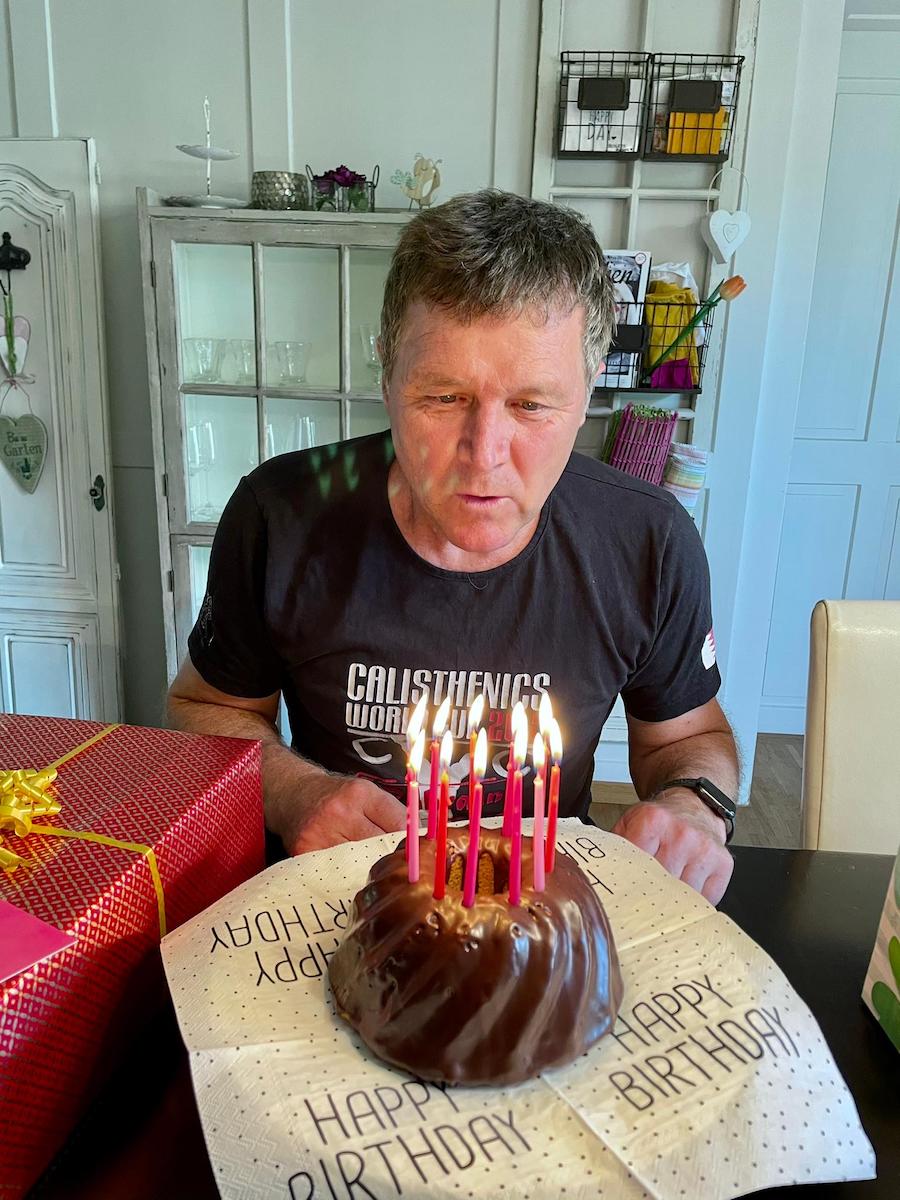 Having a birthday moment

Now fully vaccinated, I am looking forward to a Toronto family reunion in the first half of August (my mother will turn 95). My son joined me (travelling on same plane).

I watched a Canadian friend Thomas Woods compete in a European roller hockey tournament in Switzerland, and met up with old friend Paul Eigenmann there as well. 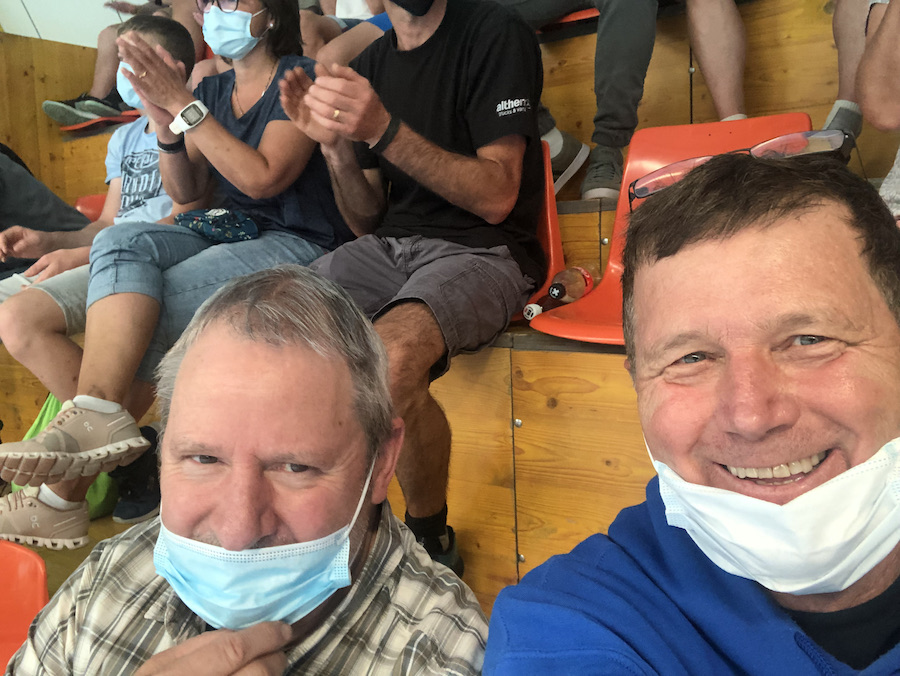 With Paul Eigenmann at roller hockey 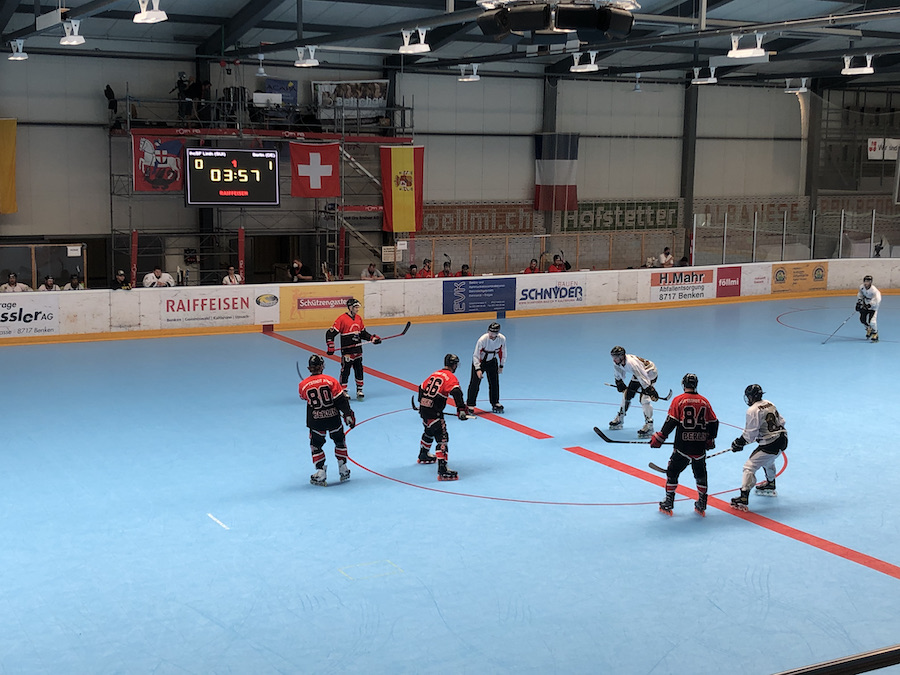 Other planned trips in July delayed due to Delta virus and scheduling issues. No worries, I can wait, have travelled so much in my life, a few weeks more will not affect my mental health. I crossed the 100.000 threshold in my Audi 3 car. 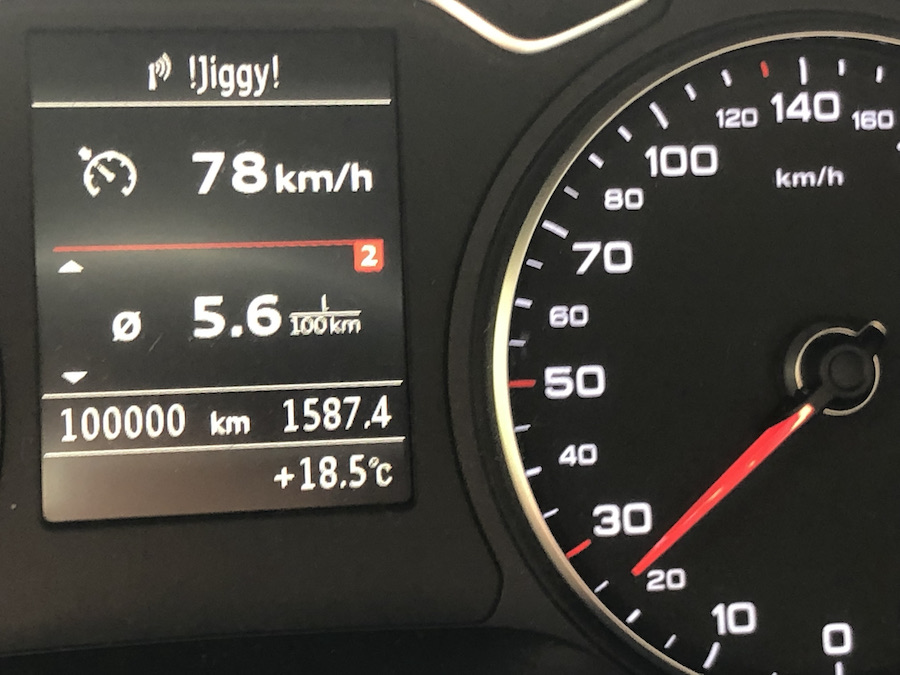 I wrote the first chapter of a fitness management book for a Portuguese group, to be published later this year, and am preparing an article for the fall entitled “More revenue with less clients” for a German trade publication. I have also started a new survey on Social Media.

Following with interest the developments in the global fitness sector: re-openings, levels of returning members, consolidation and club sales. There is a great timeline and statistics in IHRSA’s 2021 Global Report: 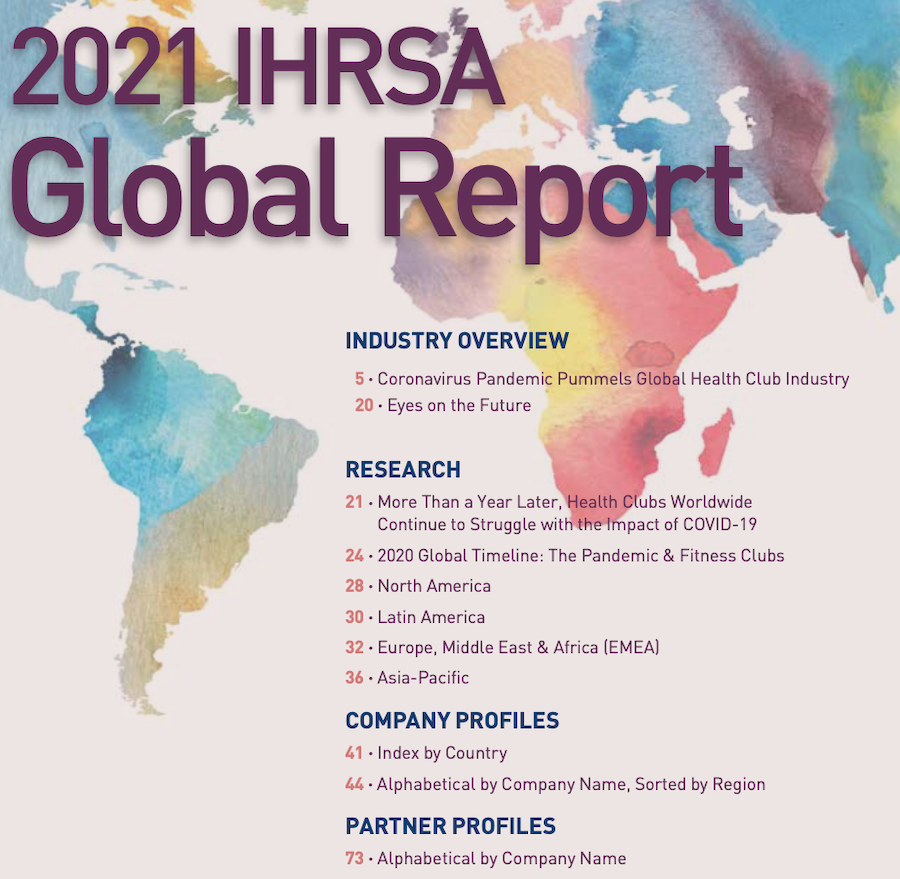 European soccer championships: exciting matches, history made with Switzerland reaching the quarterfinals for the first time. Ultimately, Italy beat England in the finals in a penalty shootout. 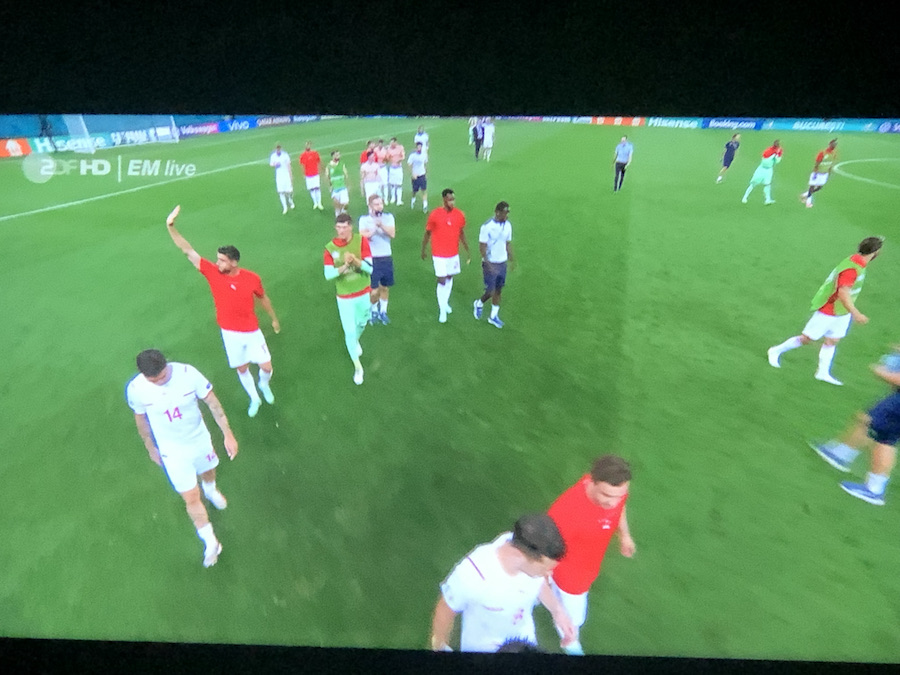 On the same day, Nowak Djokovic beat Italian Marco Berretini in the finals of Wimbledon, earning his third consecutive title in London. The “Djoker” is now tied with Roger Federer having won 20 major titles. Canadians celebrated two of their own getting far in the Wimbeldon grass court tennis tournament: Felix Auge-Alliasime getting to the quarters (losing to Berretini) and Dennis Shapavalov reaching the semi-finals (vs. Djoker).

Sascha Zwerev beat Djokovic in the semi-finals of the Tokyo Olympics, and prevailed in the final against the Russian Khachanov. Congratulations also to Belinda Bencic of Switzerland for winning the Olympic gold in singles. 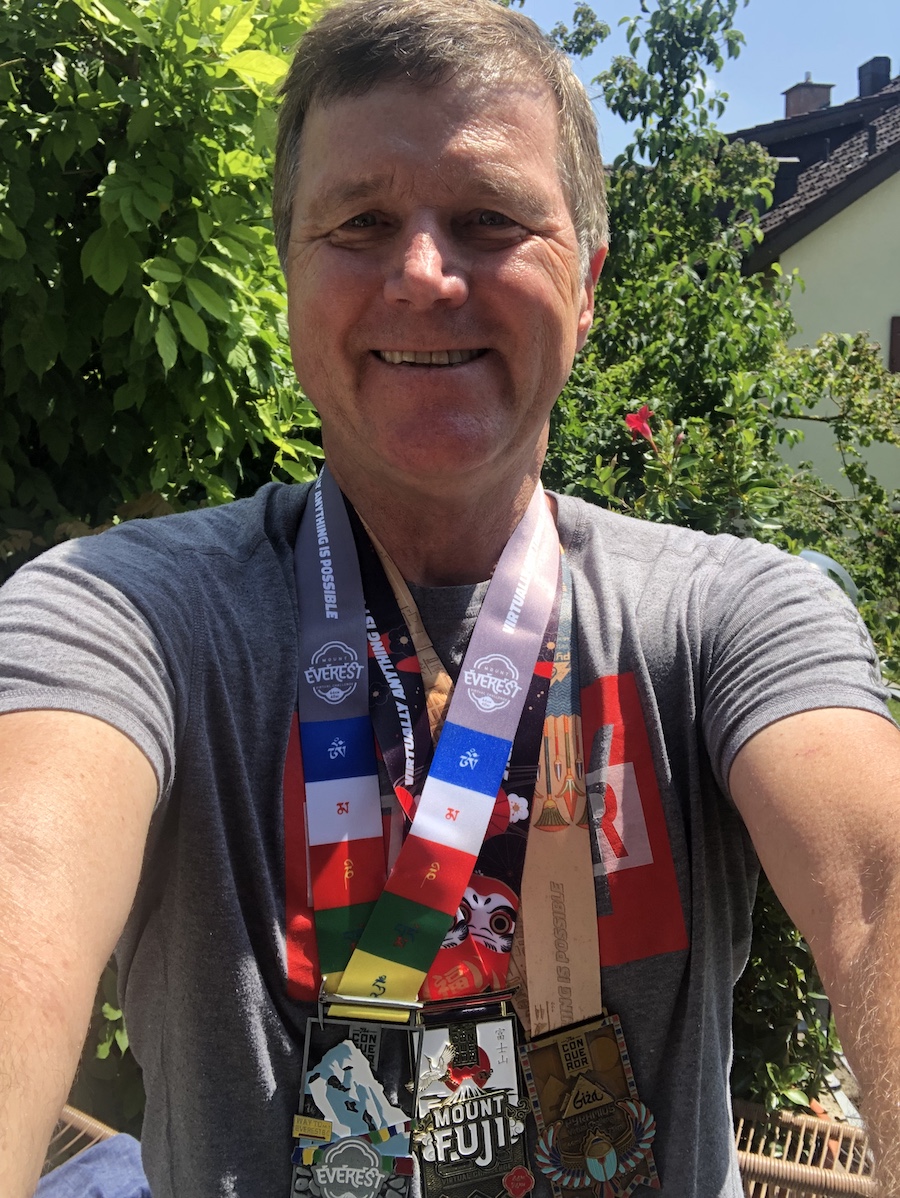