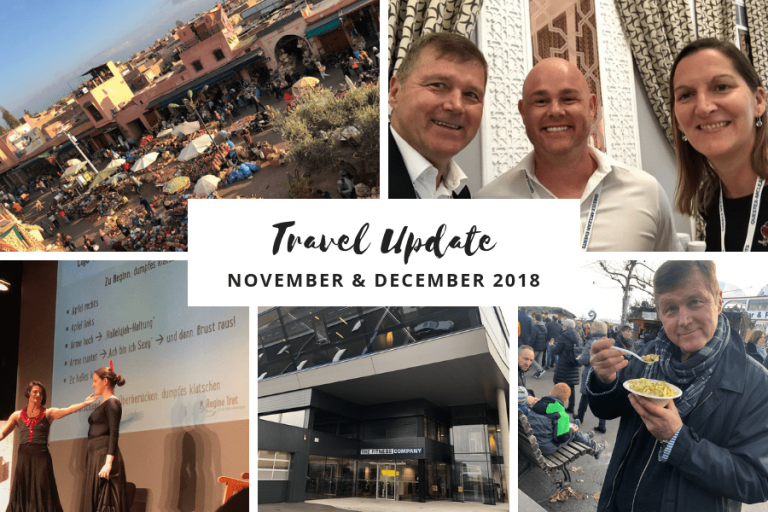 My Travels & Events in November and December

In November I was on the road for 20 days, visiting 15 cities and three events in seven countries.
Here are some of the highlights: Padel in Porto with Armando and his team

I played  Padel for the first time in over 10 years during my visit with longterm friend Armando Moreira and his family. Padel is growing rapidly in popularity, especially in South America and Iberia, with world championships and touring professionals. MARRAKECH with Hans, Yves Preissler and Natalie Gibson of LDC This annual B2B event changes locations each year, the 2018 event took place in Marrakech. Approximately two dozen 20 minute meetings were held between buyers and suppliers at the Mövenpick Hotel. I was lending support to three of my clients: Virtuagym (NL), Motosumo (DK) and Eleiko (SW). There was some time in the late afternoon to visit the famous bazaar and market, and enjoyed a tea on one of the many rooftop cafes.  On route back home I had an extended stop in Madrid for Tapas and Rioja with the editor and organiser of Gym Factory Iberia. The Fitness Company in Leonding Gottfried in front of his awards vitrine in Leonding

It took 570 km by car to reach the the headquarters of the Fitness Company for a meeting with the „Kaiser“ of fitness in the Alpen Republic, Gottfried Wurpes. Starting in 2019 I will be writing for the online portal fitness.at. En route I stopped in Salzburg at MyGym, a fully automated fitness club concept created by Christian Hörl that includes 8 locations in Austria and three in Germany.

Visits with my grown up kids In Passau I spent the evening with my son Julian in this beautiful town on the Inn river, the next day lunch in Munich with my daughter Felicia. In between I stopped at Fritz Training in Straubing (a club of the same name / part owner is where I work out close to home). Regine Trat’s book presentation (Lebenswert) was informative and amusing, including a flamingo dance interlude with Regine and her daughter. I bought two copies, should have picked up more as I have shown this wonderful work of art (all diagrams personally done by Regine) to a lot of people but only could give one away. Regine and her illustrations 30 minutes west of Munich is the main club of Hardys, who have five locations. I sometimes stay overnight in one of the hotel rooms connected to the club.  On my way home I stopped at the headquarters of Clever Fit, a 400 club franchise chain who also have clubs in Austria, Switzerland and the Netherlands. A visit to one of the new BasicFit clubs, took a peak into L’Orange Bleue and took in the wonderful Christmas market. Lectured four days to a new MBA class in Strategic Management II at the German University of Health and Prevention. This included three case studies with two days of the four taught  in english, the rest in German. Six meetings over two days with club operators and suppliers. In the early 80’s I use to fly into Berlin to play for tennis team of the Berliner Schlittschuh Club. Berlin is a pulsing city with many attractions. I also enjoyed a Curry Wurst and Glühwein in nearby Potsdam’s Christmas market. Hans with Marc Rhode in Hamburg

Met with the head of the DSSV and German Fitness Studio Association (DSSV), where the Fitness Management magazine is also based (one of the magazines I write for). The sprawling Christmas Market in this border town on the south of Lake Constance was bustling with locals and Swiss visitors. My last business trip of the year is to the Virtuagym headquarters December 12-14, back via Munich to distribute Christmas gifts to my kids. December 15th I fly to Colombo, Sri Lanka for  my fifth Ayurveda retreat, this time at a new resort (Thaulle)…back January 7th with a report on how I feel , which is usually destressed and full of energy after this wonderful mix of treatments, medicine, yoga, meditation, vegetarian cuisine featuring various curries, and friendly local staff.

My Ayurveda Retreat in Sri Lanka